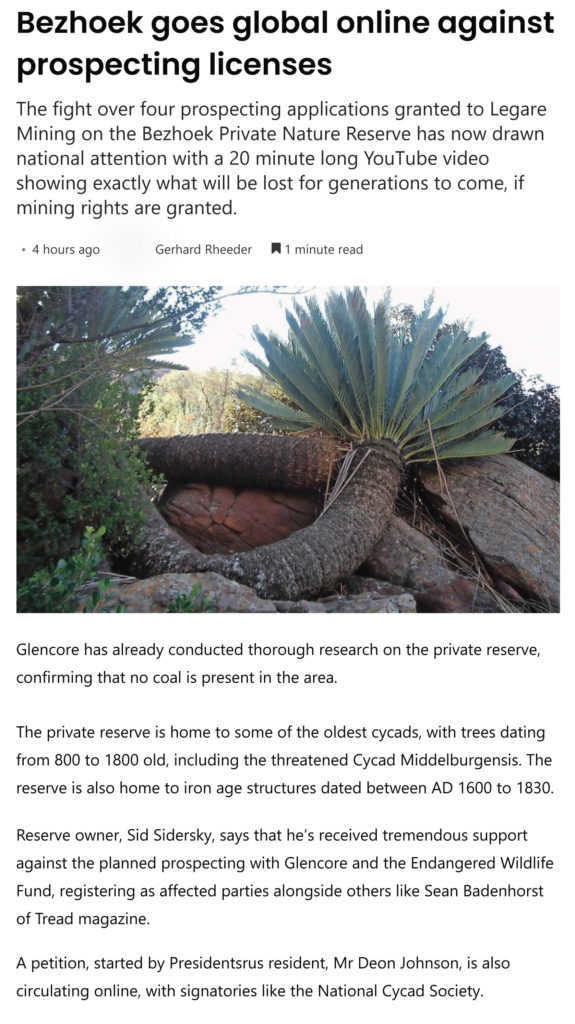 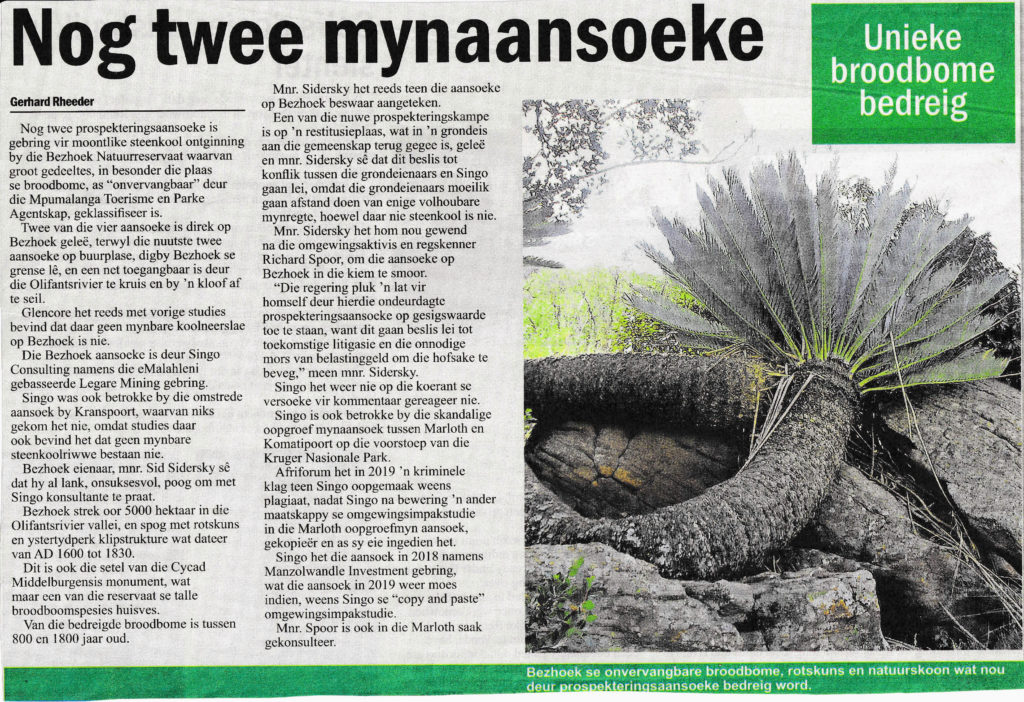 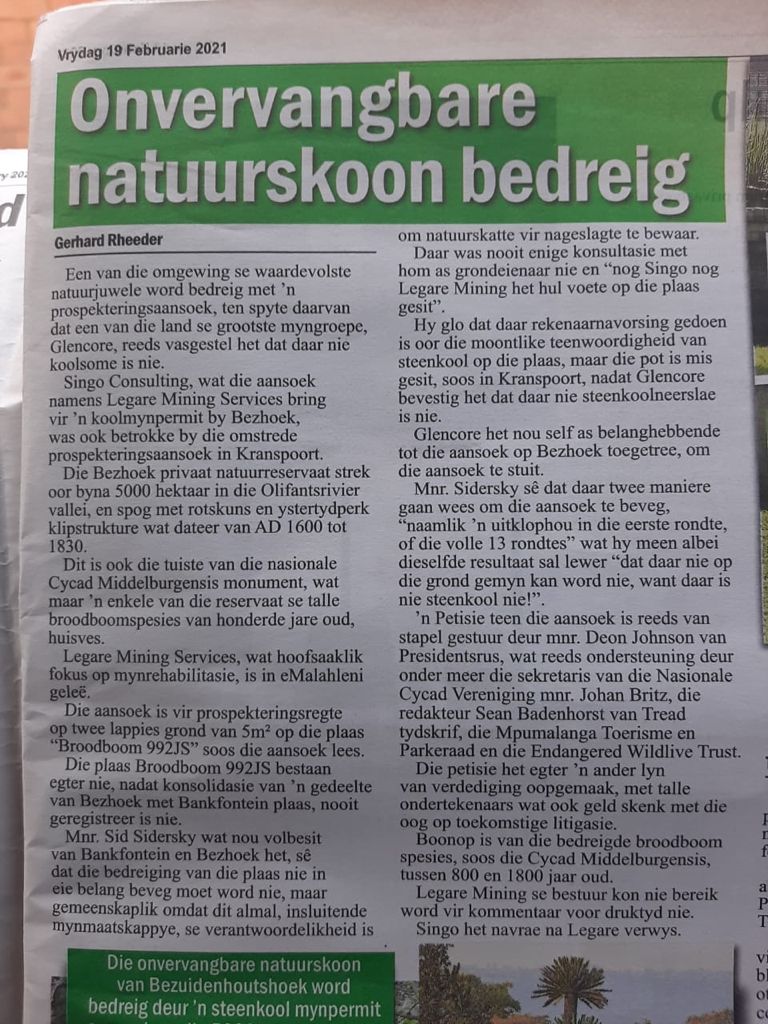 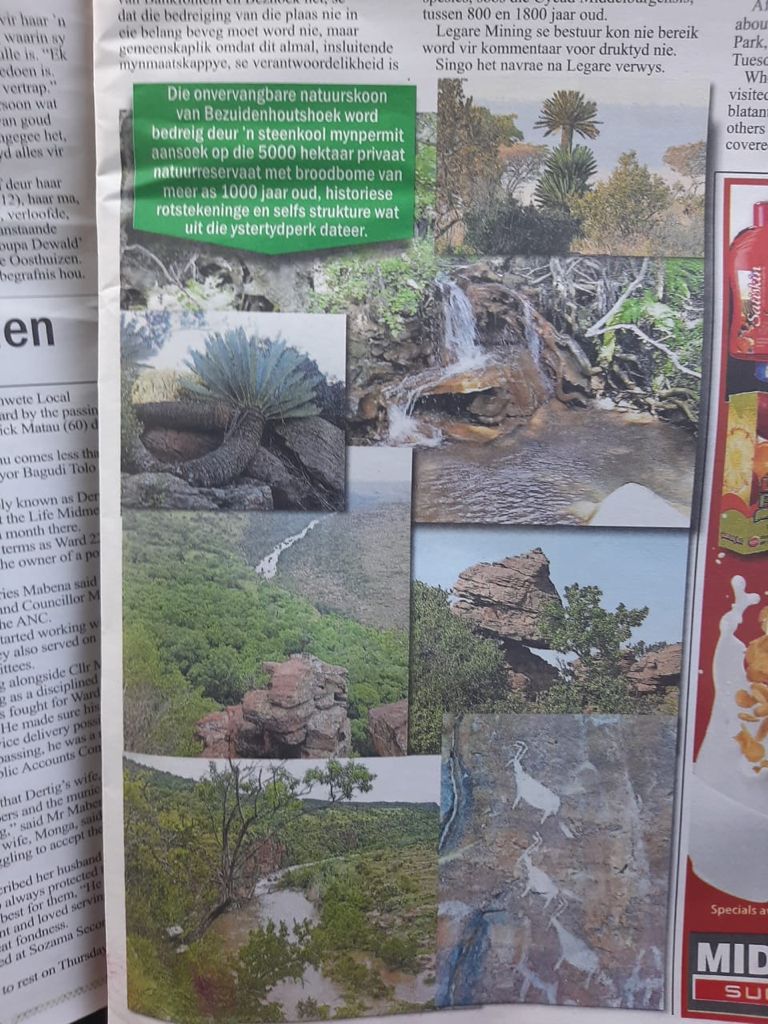 One of the area’s most valuable natural jewels is threatened by a mining permit application despite one of the country’s biggest mining groups, Glencore, having already said that there are no coal reserves there to mine.

Singo Consulting, who is bringing the application of behalf of Legare Mining Services, for a mining permit to extract coal on Bezhoek, was also involved in the controversial prospecting application in Kranskop.

The Bezhoek Private Nature Reserve reaches over nearly 5000 hectares in the Olifantsriver valley, and boasts ancient rock art and iron-age rock structures dating from 1600 BC to 1830

It is also the home of the national Middelburgensis Cycad monument, one of the nature reserve’s many cycad species of hundreds of years old, which it houses.

Legare Mining Services, who mainly focus on mine rehabilitation, is located in eMalahleni.

Mr. Sid Sidersky, who now owns Bankfontein and Bezhoek says that the threat to Bezhoek should not fought against for own purposes, but communally, including mining companies, because it is everybody’s responsibility to preserve natural treasures for future generations.

There was never any consultation with him as the property owner and “Neither Singo nor Legare Mining have set foot on the farm.”

He believes that computer research was done to indicate a possible presence of coal on the farm, but that they’ve got it wrong, as was the case with Kranskop, after Glencore confirmed that there are no coal deposits there.

Glencore itself have now registered as an interested party in the fight to stop the application.

Mr. Sidersky says there are two ways to oppose the application, namely, “a knock-out in the first round, or the whole 13 rounds,” which he believes will deliver the same result, “that mining cannot happen because there is no coal there.”

A petition against the application has already been launched by Mr. Deon Johnston of Presidentsrus, who have received the support from amongst others, Mr. Johan Britz, Secretary of the National Cycad Society, the editor of Tread Magazine, Mr. Sean Badenhorst, the Mpumalanga Tourism and Parks Board, and the Endangered Wildlife Trust.

The petition also opens another line of defence with several signatories donating money with an eye on future litigation.

Furthermore, some of the threatened cycads scpecies, such as the Cycad Middelburgensis, are between 800 and 1800 years old.

Legare Mining’s management could not be reached for comment by the time of going to press. Singo referred all enquiries to Legare.